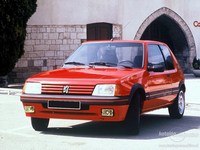 The Peugeot 205 is a 'supermini' car made the French car manufacturer Peugeot. It is not longer actually in production and was built between 1983 and 1998. It came in a choice of 3 or 5 door versions as well as a 2 door cabriolet. Its predecessor was the Peugeot 104 and its successor has been the Peugeot 206.

The 205 has become something of a modern classic and is credited with turning around the fortunes of Peugeot who, before its manufacture, was churning out very large saloon style family cars. The little 205 was a hit and proved very profitable for the company. The car was available in petrol and diesel versions and in the early 1990's it was announced that a supercharged DTurbo version was to be launched. It received very positive reviews following road testing but was very high in the fuel consumption area! This was followed by the Peugeot 405 which took the level of refinement in the diesel engine to a different level.